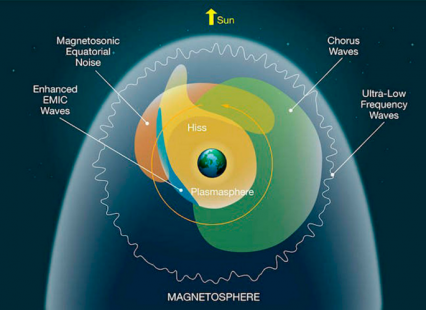 When we gaze out on the distant universe, we see billions of galaxies and we also see hundreds of billions of stars in our own galaxy, the Milky Way. Whether we observe in the narrow wavelength band accessible to our human eyes, or we expand our vision to include radio, ultraviolet, x-ray, or gamma-ray domains, we see cosmic objects because they emit energetic photons. Such photons were mostly produced far away and long ago because of subatomic particles (electrons and protons) moving in strong magnetic fields. Whether on our own Sun, in the magnetosphere of remote planets, or in distant radio galaxies, it is electromagnetic waves interacting with such subatomic particles that accelerate electrons and protons to high energies. In turn, such particles ultimately produce the light, or x-rays, or gamma-rays that make the universe come alive to us. We can only study in exquisite detail these fundamental wave-particle processes in own cosmic “backyard”. We have done this in remarkable ways with the NASA Van Allen Probes dual-spacecraft mission. The paper by Baker [2021] reports on where, when, and how this amazing cosmic accelerator just a few thousand miles above our heads is seen to operate.