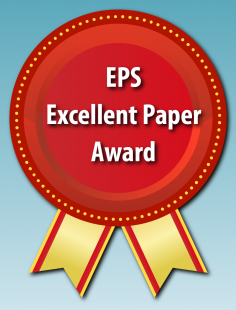 The 2021 EPS Excellent Paper Award is granted to the paper by Christopher C. Finlay, Clemens Kloss, Nils Olsen, Magnus D. Hammer, Lars Tøffner-Clausen, Alexander Grayver and Alexey Kuvshinov (2020).
The Earth’s magnetic field controls the flux of charged energetic particles into the atmosphere. Notably in the area of the so-called South Atlantic anomaly (SAA) the magnetic field is weak allowing for increased particle flux which is sensed by the electronics of passing satellite, e.g. in form of so-called single event upsets. Thus, the SAA is not only an interesting phenomenon in space, but also significant for space flight and possibly connected to operation failures. CHAOS-7 is the time-dependent near-Earth geomagnetic field model spanning 1999–2020. It includes a time-dependent internal field up to spherical harmonic degree 20, a static internal field for degree 21 and larger, which is merged to another crustal field model at degree 25, and a model of the magnetospheric field with its induced counterpart. A major improvement compared with CHAOS-6 is use of additional data from the on-going Swarm and CryoSat-2 missions, stricter criteria for selecting geomagnetically quiet times, spherical harmonic expansion to higher degree for a time-dependent internal field, and relaxation of the temporal regularization at higher degrees, resulting in lower residuals between the model field and observations. The CHAOS-7 model is used to study the recent outstanding issue about evolution of the SAA. Clearly detected is the expansion of the weakest magnetic field over central South America and the development of a distinct secondary minimum around southwest of Africa. It is concluded that these are respectively due to the gathering of reversed flux patches under South America and the westward movement of an intense reversed flux below South Africa at the core-mantle boundary. CHAOS-7 is also useful to discover localized changes in radial field acceleration between 2015 and 2018 in the central and western Pacific. This paper significantly contributes to the geomagnetic field modeling by providing the CHAOS model and has been highly cited. In addition to updating the model, it investigates the cause of the two exceptional phenomena related to the geomagnetic field evolution. Therefore, the 2021 EPS Excellent Paper Award is given to this paper.
Facebook
Twitter
Linkedin
Google