BLOG
The 2015 EPS award is given to Dr. Christoph Püthe 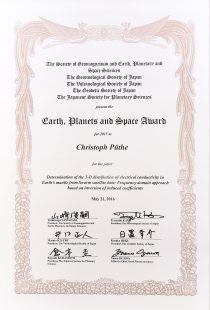 Determination of the 3-D distribution of electrical conductivity in Earth's mantle from Swarm satellite data: Frequency domain approach based on inversion of induced coefficients

Most previous global induction studies have assumed simple structures of the source field and simplified models of the Earth, using mostly ground-based observations as data. This study presented a new approach to global induction studies using the data from Swarm geomagnetic satellite missions in order to infer the three-dimensional (3-D) conductivity structure of the mantle. The author suggested a consistent way of working with satellite geomagnetic data, the sources of the complex spatial structures, and full 3-D conductivity models. The author not only introduced the concept, but also developed and thoroughly tested a new modeling code to cope with the aforementioned challenges. This study has opened a door to new global induction studies.

The first author, Dr. Christoph Püthe, made the most significant contribution to this study. Therefore, we award him the 2015 EPS Award.