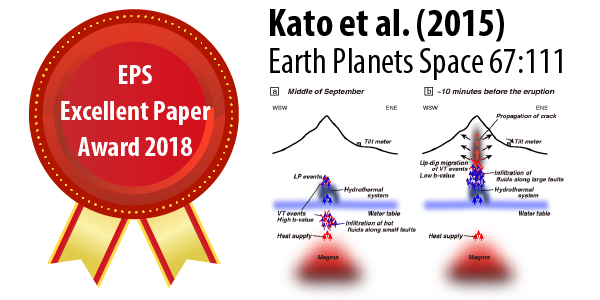 A phreatic eruption occurred at Mount Ontake on September 27, 2014, causing the highest number of casualties among Japanese volcanic disasters seen in recent decades. The mechanisms of phreatic eruptions, in comparison to magmatic eruptions, are not well understood and are difficult to predict because they tend to occur at shallow depths without any clear precursors. Kato et al. (2015) revealed detailed seismicity migrations prior to, and during, the eruptions by relocating volcano tectonic events and long period events. Evidence of fluid migrations under the volcano were strongly implicated by the spatio-temporal distribution of these earthquakes and the temporal variations of b-values. The volcano-seismology data clearly demonstrated the preparatory and precursory stages of phreatic eruptions; therefore, the paper significantly contributes to the advancement of our knowledge of phreatic eruption processes.

This award-winning article was a contribution to the special issue of The Phreatic Eruption of Mt. Ontake Volcano in 2014.