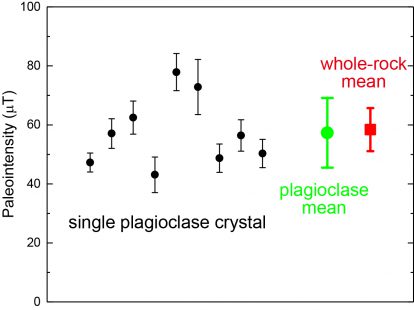 Granitic rocks could be good recorders of deep-time geomagnetic field behavior, but paleomagnetic measurements on whole-rock granitic samples are often disturbed by the presence of unstable multi-domain magnetite. Kato et al. (2018) demonstrated that single plagioclase crystals separated from granitic rocks can be reliable recorders of the geomagnetic paleointensity by a series of rock-magnetic measurements and Tsunakawa-Shaw paleointensity experiments on plagioclase crystals of the middle Cretaceous Iritono granite, for which past studies have provided tight constraints on the paleomagnetism and paleointensity. The estimated paleointensity value suggests that the time-averaged field strength at the middle of the Cretaceous normal superchron was several times as large as compared to that of non-superchron periods.

Click to view the article (Kato et al., 2018)
This article was a contribution to the special issue of "Recent Advances in Geo-, Paleo- and Rock- Magnetism."
Facebook
Twitter
Linkedin
Google