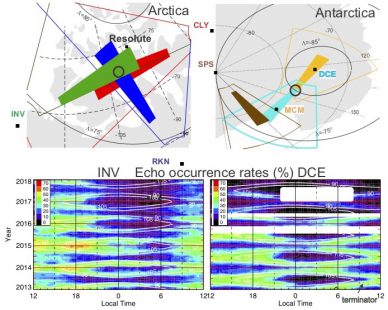 The quality of global-scale ionospheric plasma circulation maps provided by the SuperDARN radars depends strongly on the number of detected echoes. Over the last decade of relatively low solar activity, the best SuperDARN echo occurrence rates are in the polar cap. Koustov et al. (2019) show that SuperDARN radars in both the North and South hemispheres have similar patterns in echo occurrence over the daily, seasonal, and solar cycles. Many of the identified features are explained by ongoing changes in electron density in the ionosphere. Seasonal variations, however, require consideration of the solar illumination of the ionosphere affecting the production of irregularities.