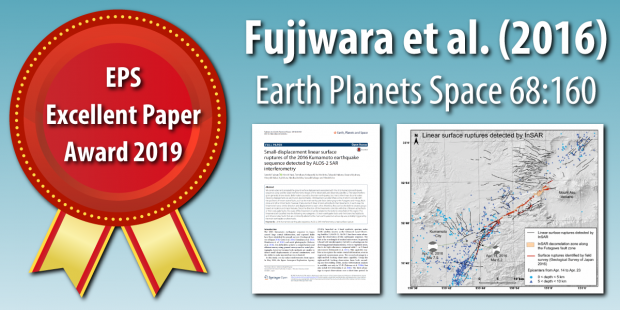 The 2016 Kumamoto earthquake sequence began with an initial earthquake of a moment magnitude (Mw) 6.2 on April 14 (JST), followed by the mainshock with Mw 7.0 on April 16; it lasted for more than a month accompanied by numerous aftershocks. While those earthquakes occurred around the previously mapped active faults, the Futagawa and Hinagu fault zones in central Kyushu, it is important to clarify if and to what extent the associated co- and post-seismic surface displacements were attributable to them. Using satellite radar interferometry (InSAR) images of the Advanced Land Observing Satellite2, Fujiwara et al. (2016) detected approximately 230 linear surface ruptures with small displacements, most of which were outside the main faults and probably triggered by the main earthquake and aftershocks. The detailed images demonstrated the power of InSAR for deformation mapping and contributed to our understanding of the generation of surface faults. Therefore, this paper significantly contributes not only to the advancement of our knowledge of earthquake rupture processes but also to the assessment of the future possible seismic hazards.